In the book about Äventyrsspel (the Swedish company that developed and published KULT) there is information about all the games they published including KULT. It is only in Swedish but I have here compiled the information from that chapter.

Some things I have touched on before, such as the list of changes they demanded for the second edition of Kult. But here are some other things that are said:

1. The Idea behind KULT came from Nils Gulliksson. He was fascinated by Clive Barker, Stephen King, Dean Koontz and comics such as Sandman and Tapping the Vein. He put together the larger concepts of what KULT should be and then they decided to find writers that could handle the project.

2. Gunilla Jonsson and Michael Petersén was hired to write the game. They had previously written games such as Mutant and books for Drakar & Demoner for Äventyrsspel. They added a lot of the occultism and gnostic context.

3. It was a struggle between Nils Gullikssons more visual and gritty vision and Gunilla and Michaels more drawn back and more subtle idea of the game. But in the end they all agreed that it was a good thing because it was what made KULT so unique.

4. Johan Anglemark was the project lead that handled the meetings and compromises between the two sides and is seen as a key figure to get KULT working as a project. He was also, just like Michael and Gunilla heavily into science fiction and complex world building.

5. KULT was aimed at teenagers. Not a new audience but towards the old Äventyrsspel Audience that had grown up and wanted something more adult and dark.

6. They weren’t at all prepared for the Moral Outrage. In fact, they were quite surprised by it. But the moral panic was a fact and KULT caused all Role Playing Games to be banned from most kind of stores. If you want to learn more about the moral panic you can dive into it here.

7. The book Legions of Darkness was made with material that was not included in the core book but written at the time. The Swedish version, Mörkrets Legioner, featured the angel that is now associated with KULT in many ways. While the US version features the cover of the Black Madonna.

9. Taroticum was planned to be a much bigger campaign similar in scope as the Black Madonna. But it was cut down already during the planning stage so no extra material was ever written. There was a plan of a tarot deck but they were scrapped at the same time.

10. The Nepharites, the Razides, The Damned Legionaries were creatures created for KULT but then sort of was moved over to Mutant Chronicles and given a different role in the mythos and a rehashed visual style. 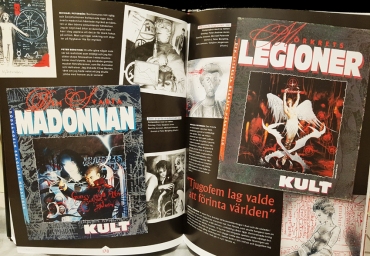 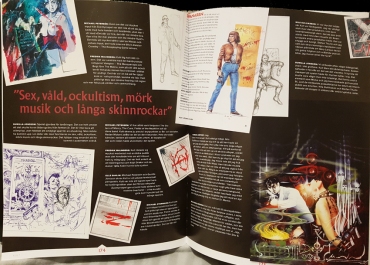